Hit enter to search or ESC to close

years of experience in recruitment

We are former auditors, management controllers, or administrative directors who have worked in consulting firms, SMEs, or groups…

Our specialized sector expertise, a database of candidates-oriented approaches, helped us to support our partners in optimizing and increasing their human capital for the past six years.

A Profession in Full Evolution

The increase of the thresholds for Statutory Auditors caused by the PACTE  law has created strong reactions and led to a lot of commentary about the profession.

Some of our clients are planning to modify their CAC assignments into contractual audit assignments. Others are turning to Chartered accountancy. All of them realize the obligation, if not the opportunity to accomplish missions with higher added value.

1/ The transition towards more advisory missions

2/Commercial sensitivity reinforced as a key skill for employees who want to develop their skills over the long term in a firm.

Let’s hope that these developments will make careers in the firm more attractive.

For several years now, we have been dealing with the specific problems of this changing sector: lack of qualified profiles, seasonal nature of the activity, problems of collaborator’s retention, etc.

Our philosophy: to be reactive, involved, and smart in order to find you the right employees in the long term!

The Notary Sector accelerates its Transformation

Law no.2015-960 of August 6, 2015, for economic growth, activity and equal opportunities, known as “Macron law”, whose initial objective was to liberalize the so-called “regulated” professions, which brought major transformations in the notarial profession, in which the effects are beginning to be evaluated five years later.

As a result, after a period of more than fifty years (1960-2015), during which very few offices were created, the sector experienced a real upheaval in barely two years (2017 to 2019), with an increase in the number of offices, by 36%, in a context of feminization and renewal of the profession.

Finally, the accelerated competition and the biannual revision of the profession’s fees is also changing the rules of the game: thus, the profession is focussing more on the “client satisfaction” dimension with an intensification of its quality approach, and its communication in accordance with the code of ethics.

Challenged by the public authorities, engaging in numerous reflections about the profession, notaries must become more agile and closer to their clients. In this context, we assist many of our notary school clients in recruiting different profiles, not based on their skills, but rather on their personality. New expectations are emerging, such as collaborative projects, the improvement of customer relations, and the complete overhaul of information systems, while giving priority to existing systems…

Our philosophy: to accompany you in these changes!

Our most recent job offers

They trust us for their recruitment 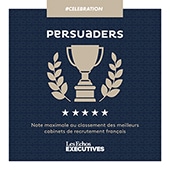